An analysis we did of certain e-commerce platforms revealed a flaw
that could be used to fund domestic terrorism
and also skirt US tax laws nearly invisibly.

After our report was disseminated, the US Congress passed laws closing these loopholes.

Plugging a Leak at a Movie Studio

We were approached by a top US Movie Studio to determine where and which department
was leaking sensitive company materials to the media.
After a brief investigation, we gave the movie studio VP a detailed report.
So detailed, in fact, that the studio's own security department [ex-FBI staffers] was
convinced that it was we who had actually perpetrated the crimes!

Once the information was made known,
the person behind the leaks came forward on their own.

A client of ours was having serious issues with their WiFi at their home office.
The WiFi was working fine during the day, but around 9:45pm each night the WiFi stopped working.
He called us as a last resort, having been through the run-around 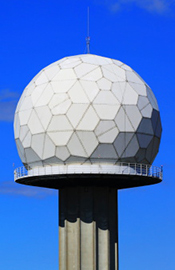 We brought the ususal networking tools and also a few more uncommon devices.

We determined that a flight control radar tower which was situated 3 miles away on a hill top
was causing issues in overpowering the local wifi router and devices, making a connection impossible.

We called the local international airport, who owned the radar installation,
and spoke with someone in the Control Tower.
We explained that the military flight control radar (which took over once the airport was done for the day)
was out of alignment and was causing issues with wireless networks in one of the surrounding suburbs.

The Control Tower technician was incredulous that the radar system could affect a wireless network.
We explained that if he did not contact the military (who shared this civilian tower)
then we would contact them directly ourselves and would let them know that the airport was unwilling to assist.
The airport radar technician then agreed and called the base radar technicians directly.

The problem with the WiFi promptly ceased. Our client never saw that same issue again.

Moral of the story: When normal approaches don't work,
it pays to hire someone who can think well beyond the usual.

While under retainer to an investment bank, we were asked to find out why the
accounts of one of the companies they had funded didn't make sense.
The accounting all added up correctly, but something was definitely amiss.

One of our operatives was placed inside the organisation. The data that was found
revealed that the company owner's brother was selling their product directly
and pocketing the cash. He was then altering the incoming goods and inventory lists
that were given to the accounting department -- which just so happened to be run by his wife.

A major high-rise office building in Wellington was experiencing break-ins
to offices in the building, but there were no clues as to how it was being done.

Our security analysis found many breaches of the building's card key system by its own staff.
There was also no valid key log or tracking.
Policies and procedures were being ignored and were not enforced.

We also uncovered a builder, on contract to the building management, who was acting
as an accomplice, un-securing office areas for the criminals
to come later in the evening using valid card keys.

None of the building tenants ever thought that anything was wrong, since they all knew the builder
and simply assumed that what he was doing was sanctioned.